Deptford Town Hall is an exquisite example of keeping tradition. It’s lovely central staircase, ceiling with detailed plaster moulding & iron work is impressive… Within the hall, is the Constance Howard Resource and Research Centre for Textiles (CHRRCT), part of Goldsmiths University Library. What better setting for an exhibition of intricate Textile Artwork by a group of Textile Artists which was founded in the  area in 1962. 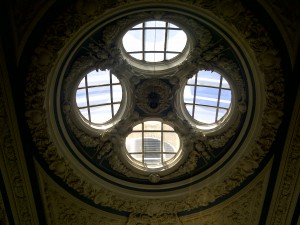 Its all in the name. And there are many well-known Textile artists and Creative crafters that are (or have been) a member or been associated with this group. It’s a labour of love and though members sometimes do come and go, the groups ethic and core sentiment to promote and encourage its members on major national and international networks and platforms remain.

Our hosts of the talk today were held by Heather Belcher (Exhibition Officer) and Lucy Brown (Education Officer) two current members of The 62 Group. Both graduated  from the past BA Textile Course which ran at Goldsmiths University; Heather  graduated in 1983 went on to do her MA Textile  graduating in 1995, at the same time Lucy graduated from her BA. (Also a special thank you to Lizzie Cannon who is an artist and Library Assistant at the university, for helping set up the exhibition). 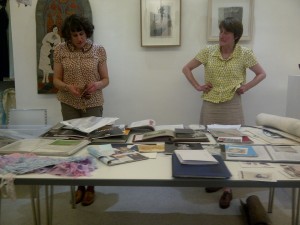 Between Heather and Lucy, there is an immense amount of work and skills; the array of concepts, artworks and catalogues were laid before us like treasure ,waiting to be gazed at in wonder and amazement. As we passed around pieces of the handling collection, I once again felt like my former-A-Level-self, wracking my brain to wry and recognise the technique and taking notes about particularly special pieces that I admired. 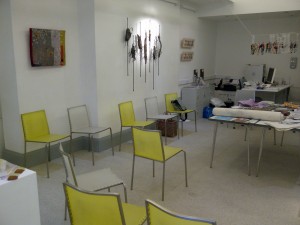 Heather’s felting threw me in particular as having only previously viewed it online. I began to understand the scale of her work and the complexity of her style of felt-making which has allowed her to create an almost pastel-like style of ‘drawing’, with still-life subjects including garments and household items.

Lacy, candy coloured and lovingly eccentric is how I would describe the samples of Lucy Brown which are laid on the table. Many of her pieces which she showed us today, were created from garments, mainly ladies nightwear that have been deconstructed into a yarn and then re-woven. In her own words, her work ” explores boundaries, re-invention, body absence / presence, femaleness and craft-labour.” I particularly like her ‘Offerings’ work and I feel a sense of loss and rebirth within her more expansive artworks.

Needleless to say I was excited  …and I hadn’t even viewed the whole exhibit yet. There were pieces which had been stitched using a variety of techniques including machine embroidery, some beautiful figurative artworks,  as well as technically advanced like the felted weave by Heather Belcher.

For a group spanning just over 50 years, their work was fresh, modern and innovative. (their anniversary was last year  and to celebrate they released a book call ‘Radical Thread’ – which I can’t wait to read!) I had expected variety of technique, but what suprised me the most was the diverse range of subjects used within each artwork. ‘Small Talk’ gives us some big talking points. 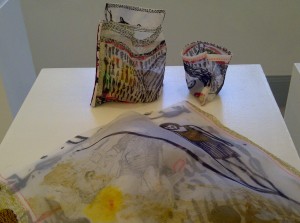 As with The 62 Group, it’s true that textiles is still a predominantly female-based craft and art-form, but I had many great conversations at Clerkenwell Design Week recently with both men and women of all ages. Everyone visting was interested in the big knitting loom I was using, some even got involved! 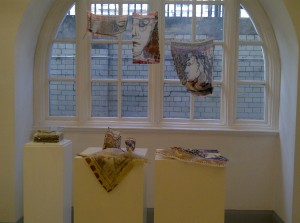 When speaking to Lucy afterwards, I asked her about the future of the group and what it means for them now, especially as there isn’t a textiles based course at the university any more. “It will be difficult, but if you really want to do it, you’ll find a way”.

We also spoke at length about the difficulty in finding spaces for exhibitions and studios, a common concern for many creative people (and close to my heart having come from a family of artists – My father is a sculptor and my mother is a screenprinting artist who for many years ran an artist-led co-operative called Cor Blimey Arts in Deptford). Some pop-up shops and exhibitions are great but others are too commercial sometimes; they can seem more about the sales than art (and what it wants to communicate with the audience). 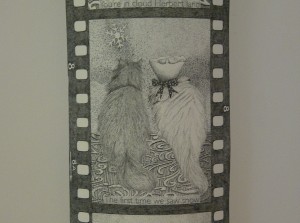 Both of our hosts has explained that they had shown work in the shop fronts of Browns on South Molton street; were they paid? Hell no, but it gave them good exposure as artists and images for their portfolio. It’s still a common thing for businesses to want new and changing concepts for their window displays, to draw in the customers, but in 2013, I don’t think it is feasable for artists, designers and makers to work for free with no other means of income.

It is something which is changing, especially in the creative industries …Even UAL have a new policy about internships and work experience for their students and graduates: “At least National Minimum Wage should be paid to a student/graduate undertaking any experience, where responsibilities and tasks are given as part of the role, and where it is NOT an accredited part of an academic programme of study”. If this is the case for undergraduates and postgraduates, then professionals are definitely due better contracts and payment. End of. 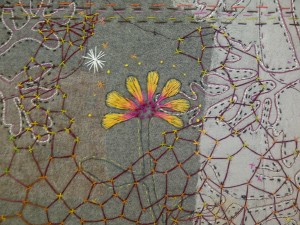 Over all I had a great afternoon and have re-kindled my love for Textile Art! To find out more about The 62 Group of Textile Artists, you can visit their website . I will leave you with a sentence from their ‘About’ section that sums up how I feel about their work and the work of many aspiring artists, textile artists, textile designers and generally creative people:

“They knew that their work deserved wider recognition and that for this, it needed to be seen in prestigious venues with appropriate publicity and critical attention.”